Covid-19: No differentiation in number of recorded suicides – 4752 calls to KLIMAKA’s helpline 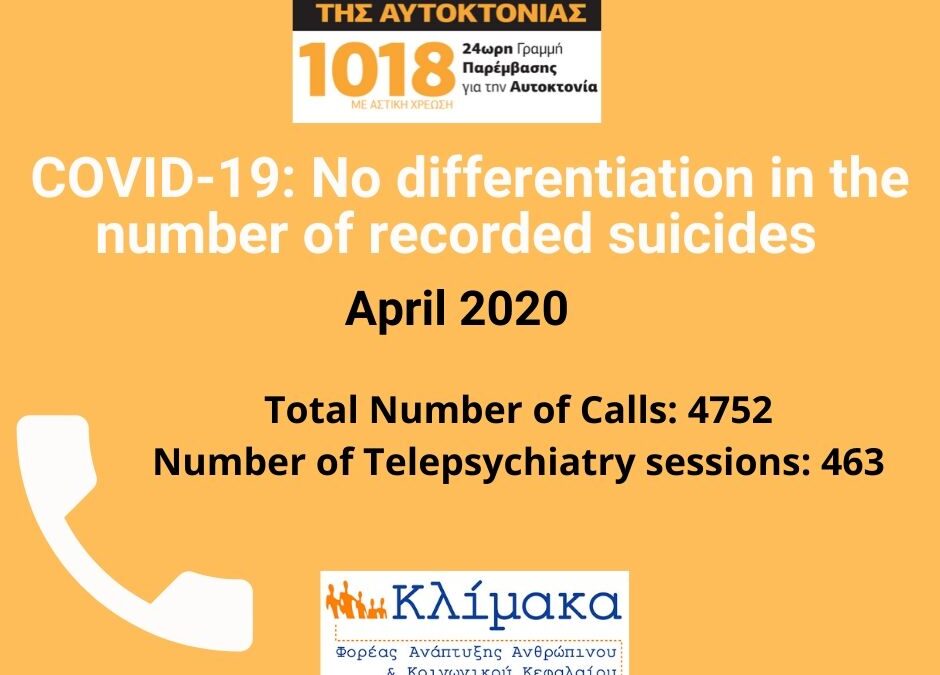 In April, KLIMAKA received a total of 4752 calls to the 24-hour Suicide Intervention Line – 1018 as well as to the Telephone Line 210 34 17 162 provided by KLIMAKA at the start of the epidemic for psychosocial support and counselling for people with mental disorders related to the new coronavirus Covid-19.
At the same time, in the same context, 463 Telepsychiatry sessions took place in April.

The majority of callers were women and the age groups from which most calls were received are people between the ages of 50 and 59, followed by young people between the ages of 20 and 29+. The most common reasons for calling the line included worsening of pre-existing psychopathological conditions (eg mood disorders, anxiety disorders), severe physical illness or disability, difficulty accessing resources such as emergency assistance and common triggers such as loss or family issues.

It should be noted that due to the current situation and due to the large number of referrals of callers from various sources the callers’ request is not part of the range of suicide. Indicatively, we mention that only 2% of the referrals in the Line of Intervention for Suicide by telephone lines of psychosocial support concerned incidents that were really in the range of self-destructive behaviors.

In the meantime, apart from the aforementioned response to an increasing number of calls and requests, KLIMAKA’s scientific team was present to support mental health professionals who found themselves in the position to respond to not so familiar and unknown circumstances.The past month has been crucial in the development of Covid-19 pandemic, as it concerned the full implementation of the self-isolation for citizens, which has drawn the attention of the scientific community to the impact of such a strategy on the vulnerable populations.

According to the latest data from the Suicide Observatory of the Center for the Prevention of Suicide, in April there was no significant difference in the number of recorded suicides in relation to the data for the same month in the last 5 years.
The majority of suicides (76%) were men and 24% were women. Older people (over 60 and 80 years old) were the ones who committed the most suicides, confirming once again the high rates of suicide recorded in this group of the population, indicating the need to develop and investigate targeted preventive interventions. People of productive age (40-49 years old) followed.

At a regional level, Thessaly and Attica were the regions with the highest suicide rates in the last month, but this does not indicate the concentration of suicides in these regions for the whole year. Finally, the most common method for both sexes was self-shot and a 15% drop in both, followed by hanging at 10%.
It is worth noting that suicides were also high in high-risk suicide sites, specifically in the Isthmus of Corinth and in the High Bridge of Chalkida. At times, in Greece, such sites have been, in addition to the aforementioned sites, the Acropolis, the Rio-Antirio Bridge, the Edessa Waterfalls, the Lake of Ioannina and the Port of Piraeus with at least 40 people ending their lives during the last 5 years in the specific locations.